All our professionals at Dimples Dental Suite maintain the highest levels of accreditation and pursue ongoing education to stay abreast of the latest trends in dentistry. 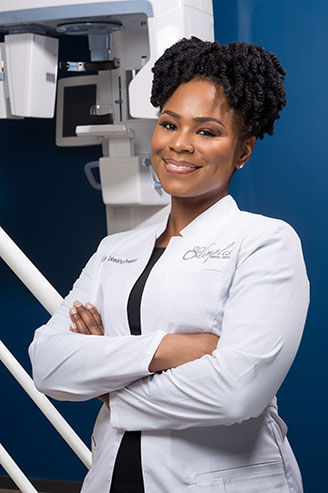 Committed, charitable, focused , this is Dr. Takeisha Presson; a woman who has transcended her beginnings yet remained loyal to uplifting those in her path. Raised on the callous streets of the District of Columbia in Langston Terrace Public Housing Development, Takeisha is a native Washingtonian. Shaped by obstacles and an unwavering drive to excel both academically and socially, as president of student government in high school, she involved herself in a number of activities in and around the school. Always focused on making others smile, Takeisha was known as an avid songstress, her propensity for entertainment was nurtured by the choir director and soon enough she became heavily involved in the Eastern Senior High School Choral Arts Society where she had the opportunity to work with such greats as Gloria Estefan, James Taylor, and Stevie Wonder; and even performed for the Clintons during the annual Christmas in Washington Concert. Being recognized as a Who’s Who among American High School students never compromised her advocacy for the disadvantaged, evidenced by her community service work throughout the district at such institutions as the Walter Reed Army Medical Center. Her hard work and contribution to the community did not go unnoticed, with awards from Eleanor Holmes Norton, such as the Congressional Special Recognition and the Mayor’s Youth Excellence Grant and Merit Award, her shining example become a beacon in the community.

After graduating from Eastern Senior High School as Valedictorian, Takeisha moved on to Ohio Wesleyan University where she continued her path of excellence with a collection of scholarships and activities. Not one to be still, instead of relaxing during those precious summer months, Takeisha took the opportunity to indulge in additional studies at the Prince Georges Community College for Dental Assisting and Radiology and additionally studied abroad at the University of Salamanca in Salamanca, Spain.

As the world traveler returned to her native Washington upon graduating with honors from Ohio Wesleyan University, her next triumph came on stage as a contestant and winner in several categories in the 2002 Miss District of Columbia Scholarship Pageant, a preliminary to “Miss America”. Continuing her studies and career in health sciences, Takeisha worked as a Research Biologist at the Center for Food Safety and Applied Nutrition and then moved into the world of dentistry as an Office Manager, for a well-established Dental Office in the heart of Northeast; ironically it was in this very office where she first became interested in dentistry as a small child. Those many visits to the dentist as a young child also gave her a passion to deliver that same smile to others. Soon thereafter, Takeisha began the pre-cursor to her dental career at Howard University. While there, her inclination towards leadership and community involvement took center stage with first place awards at several open conferences and in spite of the weight of school and surrounding activities, this member of Alpha Kappa Alpha Sorority still donated the majority of her weekends to providing charitable dental services, a phenomenal demonstration of commitment and charity. In lieu of her drive to serve Dr. Takeisha Presson’s next challenge came with a residency at the Post-Doctoral General Practice Residency at St. Elizabeths Hospital where she provided comprehensive and compassionate quality oral health care to the inpatient and outpatient population of the District of Columbia’s Department of Mental Health. Takeisha took great pride in making sure that her patients, though considered apart from common societal norms, felt comfortable and accepted. This charitable heart and keen focus paved the way for her position as the Lead Dentist at Small Smiles Dental Centers, a now abolished nationwide organization geared towards addressing the underserved child population. Well liked, highly requested and regarded, Dr. Presson enjoys serving the community from which she was raised, a Washingtonian giving back where it counts. Dr. Presson holds membership in numerous professional and social organizations, served on the Oral Health Coalition Task Force for the District of Columbia, serving on the provider relations panel for DentaQuest and has been bestowed throughout the years several service and merit awards-all too many to name. She dreamed of opening a private practice in her beloved neighborhood in Northeast of the District of Columbia. Dimples Dental Suite is her dream in reality. In her words, she is “proof positive” of what a great smile can do for a young child as with every day she strives to provide that same smile, that same feeling of health and esteem."